Critics Rave about In My Sleep

Critics Rave about In My Sleep

In My Sleep has been released around the world and critics have weighed in on their thoughts about the thriller: 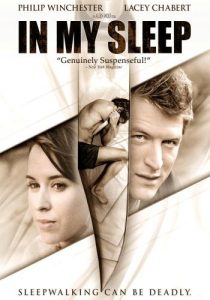 “A well-stirred titillation that will appeal to twentysomething audiences and movie-buff viewers who appreciate the pursued-pursuer, Hitchcockian style of suspenser.   Savvy Entertainment…filmmaker Allen Wolf torques this high-concept premise to darkest dimension.  ‘In My Sleep’ works because the protagonist, while flawed, is completely likable and honorable. Philip Winchester exudes an integrity, as well as a gritty determination, which makes us root for him.  Narratively, ‘In My Sleep’ never rests, a credit to the tight, psychologically astute pacing of filmmaker Wolf”

– The Hollywood Reporter, click here to read the complete review

“Hitchockian.  Lacey Chabert and Abigail Spencer are charming as two of the women caught up in Marcus’s nightmare.”

“A mind-game thriller. Maybe he has “Memento” in mind.”

“In My Sleep is a brilliantly written thriller that genuinely keeps one guessing throughout the movie. The pacing is superb and the performances topnotch.  Allen Wolf has created a very well made thriller.”

“Writer-director Allen Wolf maintains an unwavering moral outlook and a genuine fascination with the workings of guilt.”


“It works because everything about this movie (characters and plot) is learn as you go, giving you an ultimate sense of “this could actually happen.  The jump cut editing and gray scale motifs make you feel as though you are swimming through and drowning in the murky waters of Marcus’ mind, experiencing his anxiety and trauma while learning the secrets of his past. It has you guessing along with Marcus, analyzing every clue, every lead and trying to solve the mystery before something else happens.

‘It utilizes good scripts and acting to frighten the audience in a mind-engaging thriller that you won’t soon forget. It will have your mind racing from the minute it starts until long after the ending credits roll.”

“Hitchockian thriller.It would be easy to imagine In My Sleep sharing a double bill with Memento or The Usual Suspects.Would certainly make Hitchcock and even Shakespeare quite proud.” – Dayton City Paper

“It is always tempting for a filmmaker who takes on the thriller to emulate the great master of suspense, Alfred Hitchcock. In fact, the term “Hitchcockian” is as overused as it is complimentary. However, in the case of In My Sleep, a nifty thriller presented this evening at the Fort Lauderdale International Film Festival, the parallels are there in spades…As Hitchcock knew, casting is all important, and Wolf has done it well, from the sexy male lead to supporting players.”

“Wolf has a deep affection for the classic psychological thrillers exemplified by Hitchcock’s masterworks. To his credit, he captures the right look and feel of the genre.”

“A taut psychological thriller.  Starring Philip Winchester (SYFY’s Jack of Hearts in “Alice”) as Marcus, the sleepwalker in question, the eye-candy factor is off the charts as the handsome actor spends most of his time onscreen with his clothes off but don’t let that fool you that the film is short on story.  A cross between Hitchcock and Memento, the award-winning indie thriller has several twists and turns and will keep you guessing to the end.”

“Aspires to the noble tradition of L.A. film noir.  Attractive cast and a novel idea.  Hitchockian.”

“It’s a nicely packaged film that keeps you guessing.  Wolf’s premise about a parasomnia inflicted sex addict who keeps waking up with blood on his hands would make Hitchcock drool with possibility.  Wolf’s debut shows promise as a writer and director;  he certainly has the knack for creating tense moments, even a few jumpers.”

“As ‘In My Sleep’ progresses, the goings-on grow increasingly strange – with more twists and revelations than half a season of ‘Law and Order’ (albeit with much more attractive scenery than that TV show…). ‘In My Sleep’ manages to blend comedy and thriller quite well….The on-screen tension is so palpable that it’s guaranteed to keep the theater in an edgy silence.  Any glitches of ‘In My Sleep’ are made up for in a big way by the performance of the intensely charismatic Philip Winchester, as the intensely charismatic Marcus.”

“It’s nice to see that filmmakers are still paying homage to Alfred Hitchcock.”

“There is an unbilled secondary star to this movie and it is Phillip Winchester’s abs.  Winchester comes close to breaking the record for ‘most screen time for chiseled abs’ set by ‘300.’ And this ain’t no CGI. He can act too…”

“I loved the movie…so well written and directed by Allen Wolf.  There is plenty of suspense and you become so engrossed in trying to figure out who did what. I had it wrong a couple of times before the killer is revealed.  Winchester carries the movie and makes everything his character is going through seem plausible. It’s an outstanding performance.”

“You have to admire it…there’s no chance you’ll fall asleep.  Kudos to Wolf for being able to finance the project and for persuading the erstwhile Amy Aquino to play the investigating cop and Beth Grant to portray Marcus’s mother.  In My Sleep is very watchable, beyond providing a chance to ogle Winchester’s pecs and handsome mien.  There’s no chance you’ll fall asleep.  A dynamo not devoid of talent, Wolf will be heard from again.”


“An intriguing idea.  Introduces new concepts to the thriller genre.”

I enjoyed the roller coaster ride and Wolf did an exceptional job of focusing the story going without introducing too much too fast. The suspense kept at a good pace and allows viewers to feel as if they are losing their minds and regaining it along with Marcus.  The film’s ability to keep viewers guessing and wondering, “did Marcus do it?” keeps viewers enticed and invigorated.